Skip to content
Watch video online
Brain-computer interface (BCI) controlled functional electrical stimulation (FES) is a novel technique for voluntary control of FES using a signal derived from the brain. In recent years, a concept of BCI controlled FES has been gaining popularity due to the rapid development of wearable inexpensive EEG technology. Wider acceptance of the technology however, also depends on the technical literacy of therapists, patients and caregivers and of organising BCI-FES therapy in the right stage of a patient’s journey towards recovery. While a majority of studies focuses on BCI-FES application of rehabilitation following stroke, this presentation will focus on BCI-FES application for rehabilitation of upper extremities in people with subacute spinal cord injury, based on BCI applications developed by our research group. I will share our experience in delivering a BCI-FES therapy in a controlled clinical setting and in a less controlled environment where therapy is delivered by a patient’s family members. I will also reflect on the main barriers and facilitators of adopting BCI-FES for rehabilitation in a community setting.
2021-05-11T11:00:00Z
2021-05-11T12:00:00Z
— 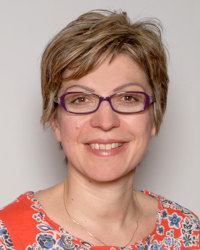 Aleksandra Vuckovic's research interests are in developing different neurorehabilitation methods to help patients with sensory-motor impairments to improve their sensory and motor functions. She is interested in Brain Computer Interface (BCI), as a new form of non-muscular channel for communication between patients and their environment, which compensates a loss of sensory-motor functions or alternatively provides strengthening or modulation of preserved neuro-muscular pathways in patients with impairments of the Central Nervous System. Aleksandra Vuckovic is in particular interested in developing and implementing patient-managed Brain Computer Interface (BCI) systems for home-based neurorehabilitation. Further areas of interest are improvements of existing rehabilitation therapies combining BCI and Functional Electrical Stimulation and exploring a correlation between the recovery and changes in the brain responses, i.e., brain plasticity. She also applies BCI for operant conditioning training of brain (neurofeedback) for treatment of Central Neuropathic pain following injuries to the Spinal Cord. Between 1992 and 2000 she worked on industrial processes control as a Chartered Engineer (Serbian Professional State Exam approved by Serbian Chamber of Commerce). She received her PhD from the Centre for Sensory-Motor Interaction, Aalborg University, Denmark in 2004, where she spent one more year as a PostDoc. Between 2005 and 2007 she worked as a senior research officer at the Brain-Computer Interface Group, Department of Computer Science, University of Essex.